What do you do after you’ve reached your goal? You’ve been dieting hard for 4 months and finally you’re at your goal weight. Do you go back to your old habits or get back in the game?

I like to think of the famous soccer player Pelé. Pelé is the all-time leading goalscorer for Brazil, with 77 goals in 92 games. Quite literally, he was kicking goals in nearly every game he played. After his modest celebration, he would return to his starting position and prepare for another attack, for the entirety of the game. Game after game, for his whole career. The same as any top performer. That’s why they’re the best, that’s why they’re successful. Continued pursuit of excellence.

The pursuit of goals, or resolutions is this never ending challenge. It’s one of the keys to a happy life. You get to the top of a mountain by going up a single route, sometimes via the marked path and other times by improvisation, but have you been to every point on that mountain? Have you been to the top of every mountain? It pays to think laterally not just vertically. By that, I mean you may have lost 20kg but what does your body look like? Skinny? Skinny fat? Well proportioned? Muscular? What does it feel like, do you feel energetic and healthy? Or you finally write a book but how was it received? What other topics could you write about? Are you proud of the entirety of the content?

There are endless goals to score, so celebrate and get back in the game. 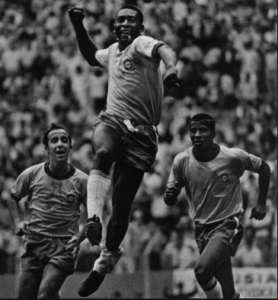 FacebookTweetPinLinkedInEmailPrint
Share this ArticleLike this article? Email it to a friend!
Email sent!